Watching yet another round of useless U.S. presidential primaries that helped solidify the inevitable shift towards a twenty-first century version of 1930’s Germany, the real life American Horror Story played out in three more states as American voters continue making the biggest mistake in the history of free elections. Flipping through Facebook looking for anything positive, I stumbled on a new report from Condé Nast Traveler that ranked Penang the number two place in the world to retire. Citing the convenience and ease of the MM2H Visa along with access to historic architecture, culinary delights, a thriving art scene, international standard health care and an English-speaking community of expats, this didn’t really surprise me that much although that’s higher than most rankings I’ve seen in the past. 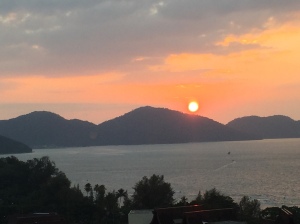 The view from our condo

Further noting Georgetown’s UNESCO status, proximity to Singapore and many beaches, the brief caption summarized some of the best highlights. While agreeing with many points, I’m unsure what target audience the magazine hopes to lure in. Given the millions of serious inquiries by Americans about moving to Canada should President Trump become reality, I’d almost swear it’s for disgruntled but sane American voters not so pathetically angry and broke like the newly created populist rebellion crowd. Add in the fact that they’d rank a Muslim country so high while conveniently forgetting to mention the official religion and you’ve almost got a scandal on your hands at least according to any CNN exit poll of Republican voters who almost unanimously agree with barring two billion people from the entering the world’s model of freedom.