Before we even knew we slept, morning broke on the Tasmanian horizon and as promised, we hopped out of bed and prepared for the hard but rewarding experience of “trading” at Salamanca Market. Only having arrived the afternoon before, Ann already put us to work peeling 88 pounds of beetroot (simply known as “beets” in the USA and Canada) before dinner. Still tired from touring Melbourne, we wiped the slumber away and brewed a cup of strong coffee in the little one cup plunger Ann supplied us with in the lunchroom. 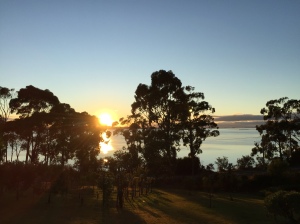 Thinking I’d have to go to work smelly, I forgot Tasmania is probably further south of the equator than Edmonton is north of it so fortunately the dawn breaks almost two hours earlier than Penang and by 5:15 AM there’s plenty of light to make your way from the small cabin into the bathroom (about 200 feet away) for a quick shower. Incredibly lucky with the weather, we may have picked the best week of the Southern summer and our day at the market was warm and sunny with very little wind. At 6:15 on the dot, Ann emerged from the main house and we all piled into the Market Buggy.

END_OF_DOCUMENT_TOKEN_TO_BE_REPLACED

Having its merits, traveling is great but there’s nothing like the comforts of home, even if “home” is 7,000 miles away from your real hometown. Relaxed and rested, Diane and I returned from Australia a week earlier than planned. Having experienced our first attempt at a “working vacation”, we discovered three things we already knew but rarely admit. First, cubicle life is a piece of cake compared to most physical work. Second, those vendors you see at the local farmer’s markets work harder than anyone sitting behind a computer (yes, financial advisers and lawyers may work longer hours but they don’t set up the office and then take it apart again ). Finally, they call it “work” and not “play” for a reason. Many workaway hosts remind potential candidates that those seeking vacations and tourism opportunities should look elsewhere. Before the 20-something crowd that forms most of the work exchange volunteers rips us apart as being old farts, let me clarify. As assignments go, this one is certainly not challenging like creating a new water source for third world villages or grueling like planting and picking crops in the hot tropical sun and it doesn’t need much brain power like forming lesson plans for kids in English classes. Quite the opposite, this place is actually fun and I’m telling you up front you’ll probably never get two hosts as generous as Ann and Bill who keep the beer and wine flowing and gave us home cooked meals that rival any bed and breakfast. But for us, it was still work and ten days was just perfect for us. 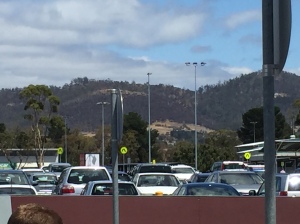 Our first look at “Tassie” from the airport

Fresh off a week of tourism in Melbourne, we had no idea what to expect as we boarded the plane for the short one hour flight on Jet Star, the discount arm of Quantas. Noting one major difference from what we’re used to, security on domestic flights in Australia is lax at best. Unbelievably, other than the x-ray machine for carry on luggage, nobody asked for any form of ID or even a boarding pass right up until boarding time. Obviously not caring what happens within their country, transporting liquids, gels, plants, food or anything else is perfectly fine as long as your flight doesn’t leave the Australian continent. Making the return much easier, we simply carried all our liquid condiments we bought from TassieTasteBuds (our host’s business) in a plastic bag before repacking them in our main luggage in Melbourne for the flight back to Malaysia.

END_OF_DOCUMENT_TOKEN_TO_BE_REPLACED

Having completed our first Workaway gig, I’m anxious to share everything with my awesome readers. But we’re back in Melbourne for a few days and today is the last day before lots of rain is on the way so we’re off to another day trip today to see The Great Ocean Road. Please bear with us a few more days and then I promise to get everyone caught up. Making a long story short, the work was fun at times, sometimes tedious and a bit harder than we expected thanks mostly to the gardening aspect and the enormous hill that the property lies on. Our hosts were probably the most generous people you’d ever get doing one of these and kept us happy with world-class dinners every night, free-flowing wine and beer and groceries to make breakfast. The accommodation was about what it looked like: a bit rustic for seasoned hotel people like us but comfortable enough to sleep well after each day’s work. Getting three days off out of ten we managed to visit Port Arthur and Bruny Island which was enough tourism and luckily the changeable weather cooperated with mild days and comfortable nights. All in all, an excellent experience but unlike the 20 somethings, we find traveling tiring and returning to work after two years (8 months for Diane) was certainly harder than the cubicle but also more rewarding.

Apologizing for the long delay between posts, here we are in Tasmania at our first ever work exchange. So far it’s been very enriching, enjoyable and delicious. Briefly put, our hosts Anne and Bill are perhaps the most generous people anywhere on the entire Workaway.org program and that says a lot since there’s over 30,000 different hosts worldwide.  But more on that later. Time flies by and the hours slip away so I’m sneaking in a quick post on our first week in Australia and I’ll post much more about the work exchange after we get back to Penang. Lucky enough to have an old friend of Diane’s living in the southeastern Melbourne suburbs, we landed at Melbourne for a week of exploring the big city before heading to Tasmania. Not the best Air Asia experience, for some reason they use the oldest and crappiest looking planes in the fleet to fly the longest haul routes. Cramped seats and an annoying staff that seemed irritated made the seven hour flight overnight flight acceptable but nothing like a transcontinental flight on Cathay Pacific where everyone sleeps and the crew doesn’t make announcements every hour telling you how much longer the flight will last. But since the other options like Quanta or Singapore Air fall outside our budget, we settled in and slept as much as possible before arriving   in the strange and fascinating continent known as Australia.

The first ting we noticed about Australia jumped right out at us upon arriving at the amazingly modern but very busy airport in Melbourne. Australians are friendly. Very very friendly. And polite. Thrown by this strange attitude that conflicts drastically with much of the large British expat population in Penang, I’d say they’re so friendly they make Canadians look rude. And that’s saying a lot. Going out of their way to help you, everyone volunteers to help in any way they can, they strike up conversations on the long line to get out of the airport and the only way to annoy an Aussie is doing something rude like jumping the queue which elicits a firm but non threatening reminder that this isn’t America and everyone should obey the rules. Politely of course. Oh yes, don’t even attempt to bring anything that even resembles food into Australia from a simple bag of chips to fresh fruit and that includes packaged and processed goods from your home country unless you enjoy heading to a separate line where they train food sniffing dogs to catch violators. Do what we did and bring your friends a Malaysian cookbook or some other local souvenir.