Being overzealous often requires flexibility as Diane and I learned once again in Myanmar. Having experienced our first work exchange program in Tasmania, Australia only a few months earlier, you’d think I would have learned my lesson since we left that assignment one week earlier than planned mostly because it was harder than we expected. Well, harder than I expected, anyway. Not really Diane’s idea, the work exchange concept seemed like a decent way to spend some extra time in various nations we wanted to see anyway without incurring huge financial burdens. Although we thoroughly enjoyed the chance to learn about and take part in running a small business, the programs work better for younger generation backpacker types with limited financial means who are willing to work harder than middle class early retirees like us. Always learning the hard way, I went ahead anyway and planned our Myanmar itinerary around a 10 day stay at what appeared to be a reasonably nice lodge right in Kinpun Village, gateway to The Golden Rock, one of the top five attractions in Myanmar. 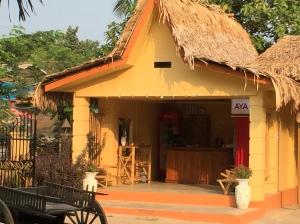 Planning on taking the bus back to Yangon before flying up to Kalaw and Inle Lake, plans quickly changed when we arrived and discovered the lodge wasn’t exactly what the proprietor described. Although on a beautiful and large piece of property, the new proprietors (who live offsite in Yangon) either ran low on funds or decided that two stars were enough for a village that serves no real purpose other than a quick stopover for those not keen on 18 hour day trips. Upon arrival, the local manager told us there were no other guests due to low season and showed us to a closet sized room with dirty walls, an air conditioner the size of a hand-held fan, a mattress that wasn’t really suitable for sleeping and absolutely nothing else except a bar of soap and what passed for a shower. 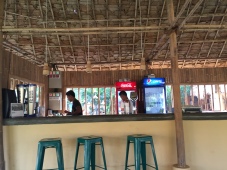 The bar and restaurant: they had about two things available from the large menu 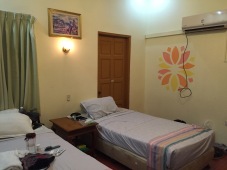 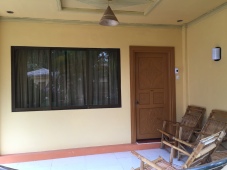 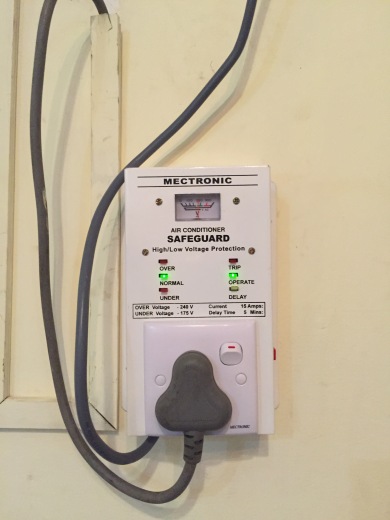 Realizing the accommodation was unacceptable and the daytime heat was scorching, we asked the English-speaking lodge manager what type of work we’d be doing since they already had a staff of eight and she told us “not much”. With little else to do other than visit Golden Rock and mingle with villagers (which turned out to be a highlight of the trip), spending ten days in the blazing heat with regular power outages and a manager unwilling to use the generator unless they had three paying guests didn’t seem like fun so we simply paid a reduced rate for three nights in the “deluxe room”. Naturally, the wifi didn’t work after the first day which made Googling other options difficult. Fortunately, Yangon was only four hours away by bus and the Hotel Accord was comfortable and inexpensive so we spent an extra four days in the big city and Googled away. Located only another 80 kilometers east of Golden Rock, Mawlamyine is Myanmar’s third largest city and not very popular with tourists, especially in the hot season. Once the first capital of British Burma, it’s the setting of George Orwell’s famous 1936 memoir Shooting an Elephant and probably most well-known to Brits by the opening lines of Rudyard Kipling’s poem Mandalay. Not exactly on most tourist’s radar, it seemed perfect.

END_OF_DOCUMENT_TOKEN_TO_BE_REPLACED

Having learned train travel is a rather reasonable way to save some bucks and meet interesting people along the way, we continued the economical express with an arduous bus trip from Hua Hin to Chiang Mai. Realizing this was a huge mistake a few hours into the trip, I quickly learned the difference between trains and buses. Designed for travelers, trains are reasonably comfortable and offer sleeping quarters for overnight trips. Contrasting that totally, taking the bus in Thailand involves an unbelievably long and uncomfortably numbing experience with Thai people disinterested in talking, helping or sharing much of anything. Perhaps already too relaxed as a non working expat, it turns out there’s now a direct flight from Hua Hin to Chiang Mai that started some time in 2015 that I neglected to learn about. Starting at 990 Baht, it costs only a bit more than the 13 hour and 20 minute marathon on a cramped vehicle filled with locals that probably never hopped a flight in their lives. Unless you’re interested in immersing yourself fully in local culture, learning a language the hard way or have a strange fetish for long bus rides save yourself some hassle and avoid Sombat Tours, the company most people use when travelling long distances by bus in Thailand. 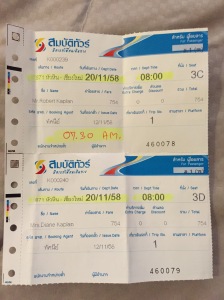 Despite today’s internet usage by the masses, many websites in Thailand contain little English, even after you click on the “ENG” tab, and obtaining pertinent travel information like schedules and prices often proves challenging. Sombat Tours is no exception and you know you’re traveling with the locals when the ticket is written in Thai and they quote the year as 2058. Arranging our transport through the hotel before arriving, we ascertained that they run two overnight trips in a “VIP” bus but we opted for the daytime departure scheduled for 8 AM. Paying no attention to the hypothetical arrival time is the first lesson when once you board what looks to be a luxurious and decent bus, at least from the outside. Unlike many other countries, the large Swedish manufactured bus had no bottom luggage compartment and the attendants standing at the station made no attempt to tell anyone how or where to place your bags. Eventually walking to the bus entrance after seeing a few others do the same, the burly clerk picked up our mid-sized bags that fit perfectly on Train 36 and simply tossed them on two seats like they were garbage. Unwilling to help much, he spoke no English and made no attempt to communicate, simply grunting and muttering Thai words while Diane and I stood there in a state of confusion. Figuring out they leave with your luggage whether you’re on the bus or not, we decided to jump on and the neatly dressed bus employee pointed for us to go upstairs.