Considering all the recent populism, nationalism and hoopla from American voters lately, you’d think we actually had the best of everything despite the high resistance to “Obamacare“, America’s supposed answer to healthcare issues. Unfortunately, only expats, overseas employees and emigrants of other nations understand how sadly pathetic American healthcare is when compared to other developed nations and as it turns out, developing nations also. Thankfully, Diane and i haven’t needed to use the Malaysian health care system but we do visit the dentist twice a year. Unlike anything stateside, fifteen minutes and about fifty bucks cash is all you need for a quality dental experience including a check up, thorough cleaning and polishing. Almost universally educated outside Malaysia in first world nations like Australia, Germany and the USA, Malaysian dentists personify no-nonsense dentistry the way it should be. Whether you need routine cleanings, x-rays or complicated procedures like root canals, it’ so quick and inexpensive anyone can afford it and you’ll walk out mystified and wondering why the world’s only superpower can’t figure out how to provide simple, affordable dentistry. 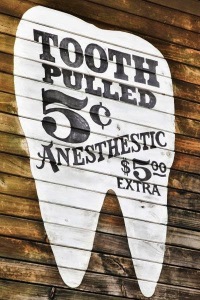 Already having been to the dentist six months ago, our follow-up visit was so fast and easy it’s practically gone from memory. Having arrived in Malaysia armed with pages of records from our last dentist in suburban Walnut Creek, California, we’d heard it’s quick and easy but didn’t really know what to expect so we came ready for anything. Unlike most experiences all Americans are familiar with, there’s no time for reading in the waiting room, no bullshitting with your hygienist, no sitting in the chair after your name is finally called and no chatting with the dentist about last night’s ball game. In fact, there’s no hygienist at all because dentists are not highly overpaid elites that drive the best cars, charge five times what the insurance company pays and use inefficient “techs” that waste time asking stupid questions and place little bibs on people only to have the dentist ask you the same questions all over again. But they are professionals versed in the latest technology and using equipment we’d never seen in the USA like overhead screens letting you see every tooth while they check you for the first time.

Another absentee from overseas dentistry is the sales pitch. Over the years, I’ve always had perfect teeth devoid of cavities but inherited recessed gums from my parents. According to my California dentist only 2% of all adults my age still have all 32 teeth so I finally pulled all four wisdom teeth a few years ago to avoid future complications. Because I waited so long, it led to a condition known as “deep pockets” that dentists love to spend time talking about. Immediately smelling dollar signs from referrals to oral surgeons, my first dentist in California consistently told me I needed some sort of crown on ten teeth or more, each one billed at fifty bucks and rarely covered by insurance. With more than a few of them falling out by the following visit, this guy ripped me off for years, claiming they fall off due to my brushing habits while it was probably poor work since this guy was so cheap he only hired inexperienced cheap labor as assistants and used family members to help with billing. And that was a guy in a suburban office park with good reviews on Yelp.

Based on recommendations from some of Diane’s co-workers, I finally ditched that guy and found a new office with the world’s friendliest (and possibly slowest) staff. Unlike the first guy, their solution was visiting a high-priced oral surgeon for an evaluation which of course turned into a recommendation for a $1,240 surgical procedure. Even with Diane’s incredibly generous company benefits, Delta Dental of California agreed to pick up about 20% of the cost. Pretending dentistry and vision care are somehow not part of health care, Americans (and Canadians) know all too well that company health plans and the national socialized programs never pay for these very essential items, often putting routine services out of financial reach for lower wage earners. Thankfully, my unexpected layoff forced me to cancel the overly expensive procedure and ironically, my “deep pockets” reduced drastically by themselves after having my wisdom teeth pulled. Conveniently neglecting to mention that it’s normal to get sustained improvement with four fewer teeth, the methods they market to keep themselves rich while many Americans struggle to make ends meet is sinful and unnecessary (except for their wallets).

Equally similar to America’s highly unaffordable, sales driven inefficient dental industry, Canada’s version is even worse. Spending six years in Calgary, Alberta during the early 2000’s, our dentist converted his business to mostly cosmetic and other vanity based expensive specialized services that required expensive training in Las Vegas for him and half his staff. Although not as pushy as the American sales pitch, they always tried to sell us some insanely expensive whitening procedure suitable mostly for prime time TV anchors or models where beautiful smiles are essential. Dictated by provincial guidelines, Canadian dental insurance companies pay according to established “norms” for standard procedures and haven’t been updated for inflation since the Justin Trudeau’s father was prime minister. Usually shelling out 50% of every office dental bill, leaving Canada makes financial sense for the mouth in almost anyone’s budget. Living upper class high-end lifestyles, Canada’s dentists rank among the wealthiest citizens making dentistry a total failure when it comes to the socialism argument. Take note, Bernie Sanders supporters.

Pleasantly surprised at the ease and convenience of Malaysian dentistry, new expats immediately understand how sadly cheated Americans are when it comes to their health. Removing insurance forms and overly expensive procedures benefits, the hardest part is knowing what dental office to choose from. Based on positive referrals from neighbors, friends and other expats, we chose K K Ong Dental Surgeons in Tanjung Bungah, whose convenient location right across the street from our local supermarket makes it an easy addition to a weekly shopping trip. Six months ago a young and friendly Chinese dentist who spoke fluent English examined my teeth and gums. Briefly explaining what my North American dentists told me about my weakened gums and deep pockets, she smirked and told me my crowns fell off because they never put them in properly. Offering to replace them, she cleaned my teeth thoroughly and spent about five minutes inserting new crowns at one tenth the cost of my American dentist. Also explaining that most of my gum issues simply need lighter brushing with an extra soft brush, she chuckled when I explained the American method of medically unnecessary suggestions designed to make the dentist a bit richer.

Assuring me that my new crowns would never fall out, we returned for our second visit a few days ago at 8:50 AM, ten minutes before our scheduled appointment. Customary for Asian houses, we removed our footwear and took slippers as entered the immaculately spotless office. Already expecting us, there was no need to waste time at reception and at 9 AM on the dot, they called both of us in. Needing to use the bathroom, the dentist and her staff of two well-trained Malay girls stood there waiting impatiently and wondering why I was two minutes late. As promised, my crowns were fine and a twelve second look at my teeth showed no problems so we moved on to the cleaning. Painlessly and quickly, she whipped through a cleaning that always took my highly trained German hygienist in California about 40 minutes or more. One minute later, she told me she’d do a polishing but didn’t waste time running through a cornucopia of flavor options like tutti fruity or cinnamon. Tasting only like salt, my teeth felt clean as a whistle and about ten minutes after I walked in she said “OK, see you in six months“.

Naturally, Diane was already waiting for me since she doesn’t get as much tartar buildup as me and didn’t need to use the bathroom. Paying by credit card, the bill came to about $55 USD and that’s actually expensive due to a recent decline in the US Dollar versus the ringgit. Reiterating how healthcare is amazingly better, cheaper, equally professional and much more efficient than America’s version, we walked out of the office about 17 minutes after arriving and headed for an early lunch at the food court. Remaining low on the priority list of the pathetic excuses for presidential candidates, healthcare continues to get the short end of the stick and the worst part is how many people complain but refuse to accept how anything outside America could be better. As a Muslim nation, I’m sure Trump supporters visualize Malaysia’s dentists as terrorists brandishing extraction tools from the 19th century. Too bad the joke’s on them since Donald Trump will never have to fill out an insurance form or work a few extra shifts to pay for something as important as basic dental work. Americans would be better served with a little expat education and not a lunatic billionaire at the helm.

8 thoughts on “Open Wide and Relax”