On September 30th, 2014, I decided to give blogging a shot for the first time. Horribly unskilled at coding, websites, and almost everything else technical, I spent two months self-tutoring on WordPress basics and another few weeks picking a theme. Figuring out to start an expat blog a half-year before actually leaving the country also proved challenging. Finally deciding on a theme that combined our decision to retire early due to an unexpected layoff, the challenges of moving overseas to a destination we’d never visited and some stories of “expat destinations research vacations“, I didn’t expect to garner much interest. Seventeen months later and eight months into the overseas experiment, somebody must be reading even though my comments page is sorely lacking compared to many other similar blogs. Having just passed 50,000 page views I’m grateful to anyone that visits our page and extend a big thank you for taking some time out of your day to read our stories.

Trying to craft the blog a hit differently than typical expat blogs that talk endlessly about tourist destinations, restaurants and budgeting, I always try to be a storyteller and inject some more insight into the topics. While trying to keep negativity out of the stories, anyone who’s lived overseas can tell you there’s good and bad so I like to inject my own sarcastic overtones but still keep it lighthearted enough. Hoping I’ve succeeded most of the time, it’s been fun, challenging and often very interesting hearing from so many people. Life in Malaysia is always interesting to say the least and for now, I leave you with the most ridiculous product we’ve seen sold in this nation. 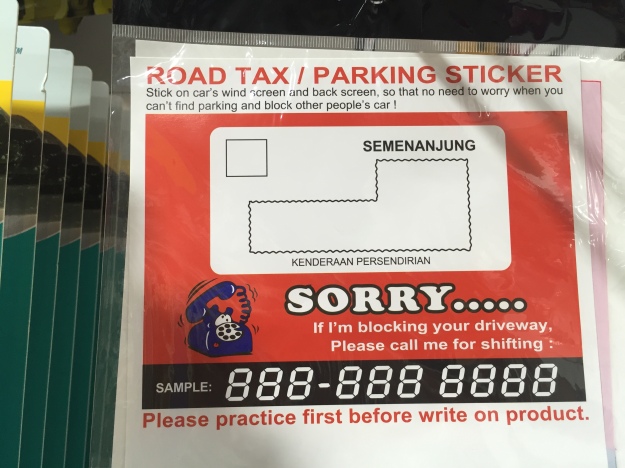 Understanding not everyone can appreciate what’s an obviously silly product, let me fill you in. Keeping in mind these are observations and not judgements, we’ve learned that Malaysians park anywhere and everywhere. Double and triple parking, blocking traffic, buses, and pedestrians is routine. No Malaysian would ever care about blocking your driveway and asking them to place a sticker on their car so someone can call them is a ludicrous notion. Motorbikes drive on the sidewalk and think nothing about driving on the wrong side of the road if it can save a few minutes. Although laws probably exist, they’re never enforced, there’s no penalties or ramifications for driving recklessly and parking illegally and even if there was, nobody would listen anyway.

That’s part of the fun of living in Southeast Asia. Basically a free for all where anything short of violent crime goes, it often feels like living in 1950’s America before anything we take for granted today became law. Sometimes it’s even like the Old West when law and order was mostly an afterthought (minus the guns of course). They also love making noise. Fireworks galore all year long, mysterious popping explosion sounds that sound like cars backfiring, putt putt motorbikes with no exhaust and who knows what else. Fortunately, it’s safe and inexpensive so putting up with little things like horrible drivers, daily poisoning of the air from burning garbage, and lack of tissues, toilet paper and clean bathrooms is just part of the experience.

Thanks for Following along !! We love comments and insights

9 thoughts on “Not so Shabby”