Coming to a close, if someone asked me to summarize our first year as retired expats in Asia in one phrase I’d have to choose “always interesting”.

In retrospect, eighteen months of correspondence with our MM2H agent helped make our transition to expat life in another part of the world relatively simple and painless. Knowing we’ll probably wind up in Thailand after our lease expires in July, 2017, we’d still recommend Malaysia to anyone with ample financial means for its above average infrastructure (by Southeast Asian standards), lack of language barriers (everyone knows and speaks English) and relatively disaster proof geography (outside the earthquake and typhoon belts). 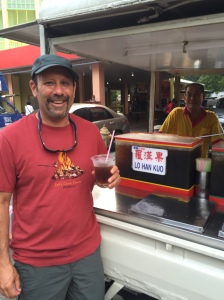 Despite the statistically strong economy, the Malaysian Ringgit remains at near record low levels versus the USD and British Pound but is unlikely to cause problems for expats (barring any more financial scandals or unexpected calamities to emerging markets). One of the only major disadvantages is a banking system that forces people to the money changer for foreign currency. Having exchanged way too many US Dollars for ringgit at a lowly rate of 3.7613, (it hovers at 4.25 to 4.35 for the last few months) we failed to realize the ramifications of a plummeting currency and kept less than $100 USD on hand which leaves us hosed when we need to buy foreign currency with the ringgit. But other than that, becoming an expat in Malaysia was easier than expected. 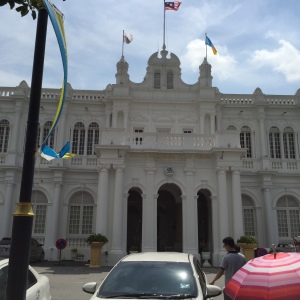 As for choosing Penang over Kuala Lumpur, we heard negative comments from many readers. Commenting on Penang’s lack of night life, large shopping centers and expat organizations, we’ll agree that Penang isn’t for everyone. Unlike many working expats with kids, we prefer socializing occasionally with reliable sets of friends that share common interests and backgrounds. Meet-up activities are much fewer and are often attended by the same groups of people who are older, less active or simply not for us and this is fine. Having established three good sets of couple friends (two that live in our condo), Penang’s slower lifestyle suits our needs just fine. Traffic is worsening, however, and even with reports of a 30% decline in tourism, our little touristy beach town is bumper to bumper traffic for the  entire two-week year-end holiday period so we’re happy to enjoy the best infinity pool on the island daily and walking often becomes faster than sitting in KL-like jams. The only other thing we hate is long trudge to and from the airport. Often taking 90 minutes to get home after a long road trip, there’s entirely too many cars on the island and no real short cuts. 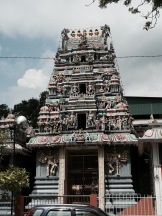 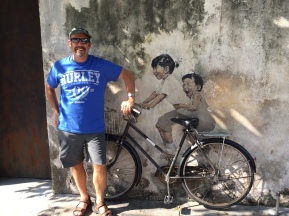 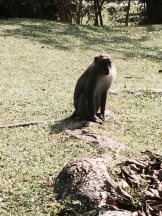 Another big difference between Malaysia and Thailand is the soil. Disappointed with the fruit, we envisioned a plethora of fresh tropical fruits and large array of fresh vegetables. After visiting the amazing wet markets and beautifully stocked western supermarkets in Chiang Mai, it’s often hard readjusting to Penang’s mostly imported versions of fresh greens and very average tasting domestic fruit. But laksa, char kway teow and beef randang are almost impossible to find in Thailand and are three of my favorite foods so we enjoy what’s here in between traveling. Already looking forward to three work exchange assignments in Australia, Myanmar and Cambodia, 2016 looks packed full of adventure and it’s nice to have a comfortable base to relax after traveling so we’re still glad we live in Penang. Considering we never even visited, we’d have to say the leap of faith worked out better than expected, despite the worst haze season ever. 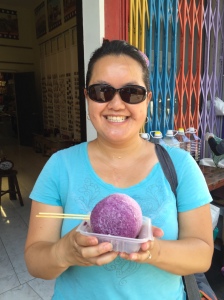 Writing the blog wasn’t always easy without the benefits of my PC (it just arrived in late October) and I realize some of my earlier posts may seem more comprehensive but quite frankly, it’s easier to write about past adventures from the comfort of a suburban life spent waiting for your 50th birthday than once you’re actually engulfed in the “easy life” of retirement. Realistically, I’m more tired now from daily gym workouts, lots of swimming, long walks, hikes in the draining heat and trips longer than vacations taken during our working years. So thanks for the continued support during our first six months.

Wishing everyone a happy and healthy 2016, I flipped through my Iphone camera today and discovered I’ve taken over 3,000 pictures since arriving in July. Deciding to share some with our readers, I thought about going through them all and figuring out what I hadn’t posted but quickly ruled that out when it became as much work as my old cubicle job. So for our last post of the year, I decided food is the obvious standout so although it’s been overdone and I’ve stated many times my intent not to mimic the foodies, let’s face it. Eating is ultimate joy of life other than sex so hopefully nobody condemns me for posting some of the best foods I’ve eaten since leaving North America.

Encountering most Malaysian food dishes for the first time, one thing that makes the food interesting is knowing it’s rarely found in the Western Hemisphere and if it is, most Southeast Asians will agree it’s not authentic. Here’s some of my favorites in no particular order.

No place makes it the same; I like mine sour and fishy. If you truly want the island’s best you need to head to Balik Pulau on the island’s back side and visit Kim Laksa at Nan Guang Coffee Shop. 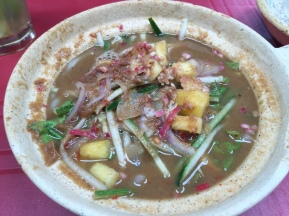 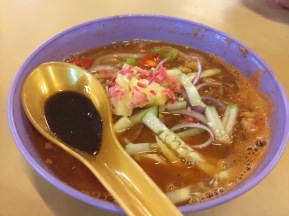 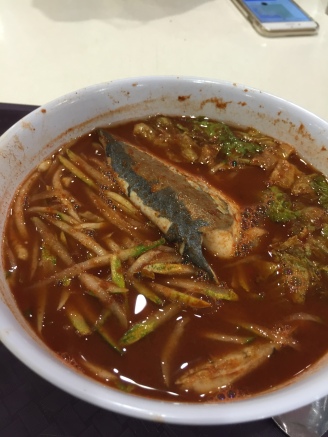 Penang’s most famous dish. Perfect when made properly but I’m still searching for the perfect one after six months. Anyone? 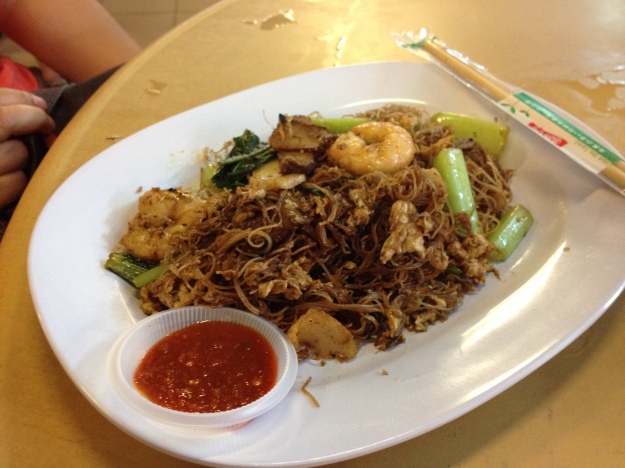 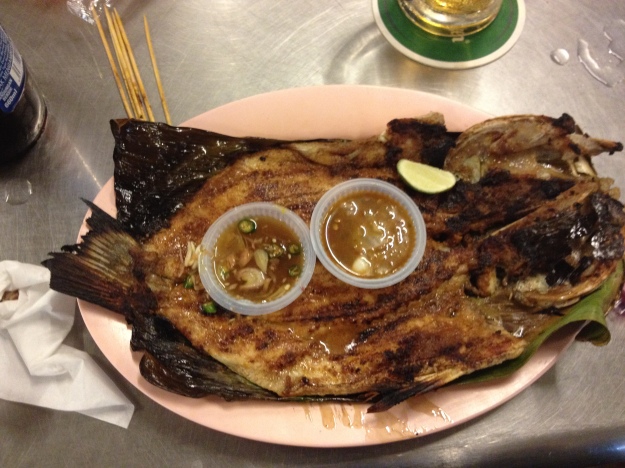 This is my other favorite dish and one of the world’s most perfect foods in my book but sadly, most places do a watered down version that’s not very flavorful. One exception is such a standout that I only go there when I have a craving. Seng Lee Cafe in Palau Tikas is a Penang institution and although they serve other food, don’t waste your time. Head straight to the Indian gentleman and master chef for the tastiest noodle dish ever. Dripping with flavorful squid and a tomato based sauce that’s second to none, it’s the greatest eating experience for fans of this dish. If you haven’t tried, you’re missing out. 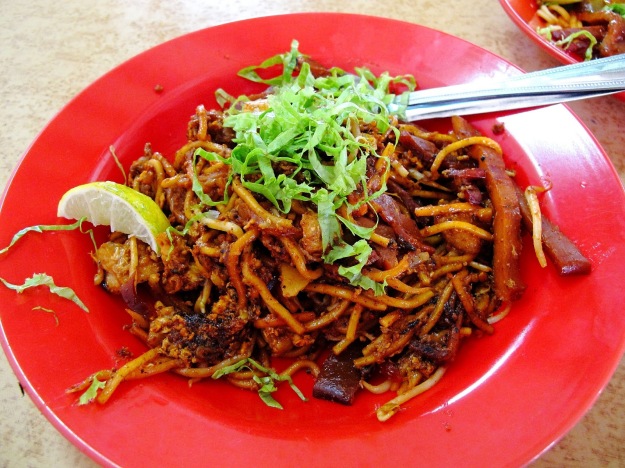 It sounds simple and it is. Simply the tastiest deep-fried spring roll in Penang. FInd it at Long Beach Cafe in Batu Ferrenghi. And stop by to say hello while you’re here

Initially disappointed that Hokkien Chinese soups lack the flavors of Cantonese style cooking, this relatively simple soup grew on me. Served at any hawker stand, don’t expect the tastiest broth and bring salt if your tongue is used to North American Chinese cooking. My favorite is at a simple food court called Old Town Food Court in Tanjung Bungah. 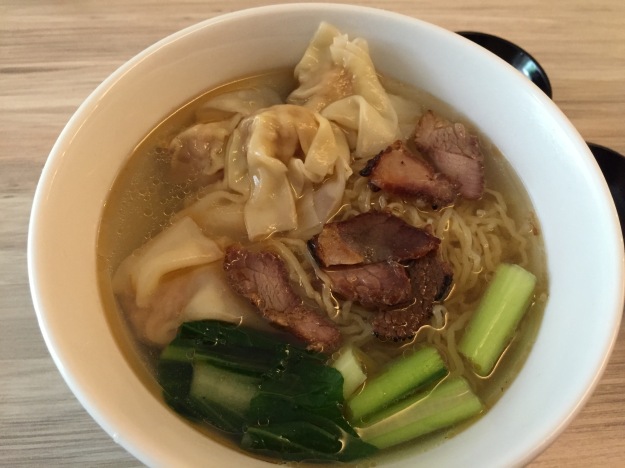 Not exactly up there on the popularity lists, frog has tasty small little morsels of relatively lean meat and tastes good when combined with ginger, spring onions, garlic and a rich broth. Watch for bones. Head to Viva Local Food Heaven Food Court for this uncommonly yummy soup. 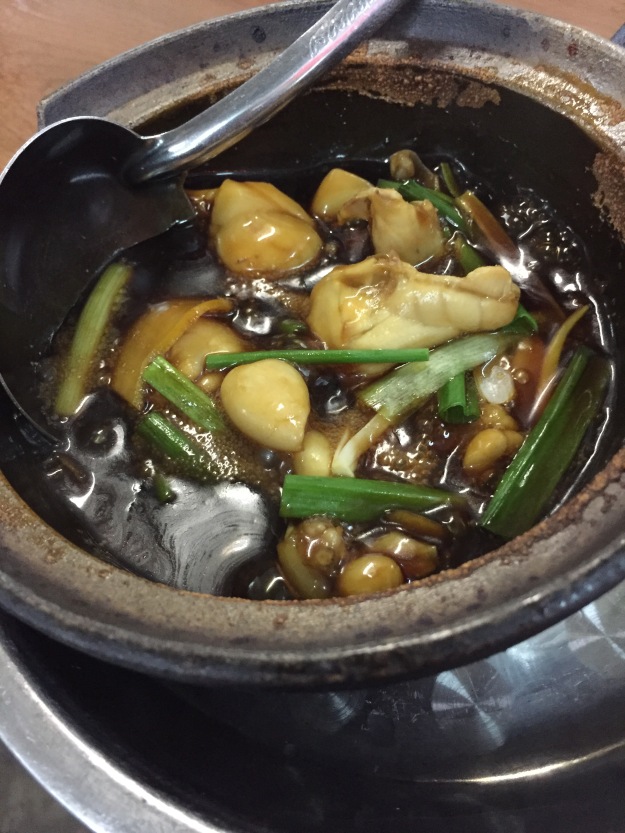 One of the hardest foods to find in Penang, our relationship manager at the bank turned us on to this delicious variation of nasi dishes. Originating in West Sumatra, Indonesia, they’re all over the capital city but in Penang you need to hunt it down. Fortunately, there’s Nasi Padang Minang on Jalan Transfer. Serving Nasi Padang for over 40 years, get here after lunch time and before the dinner rush because the locals who enjoy it know it’s worth waiting for. With over 40 dishes of fresh meats, fish and vegetables, it’s one of the best “harder to find” foods on the island. 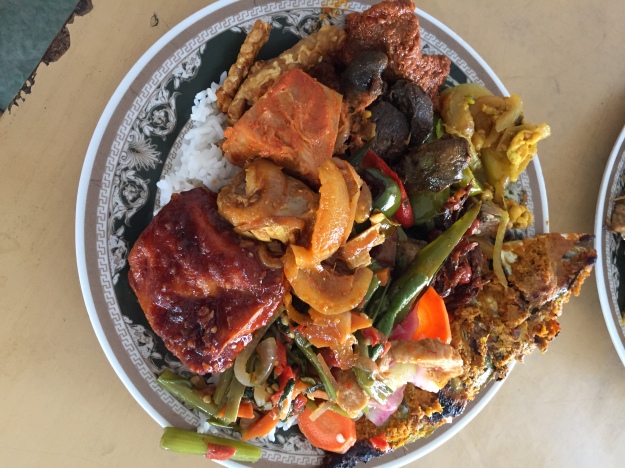 My other favorite soup that you simply can’t find in Thailand, Hokkien Mee is a spicy noodle that consists of egg and rice noodles stir-fried with egg, slices of pork, prawns and squid, and garnished with vegetables, small pieces of lard, sambal sauce and lime. (for adding the lime juice to the dish). For me, it’s the other perfect noodle soup (excluding Vietnamese which is almost impossible to find in Penang). I’ve had many variations. Some are awesome and a few really suck so you’re on your own for this one. 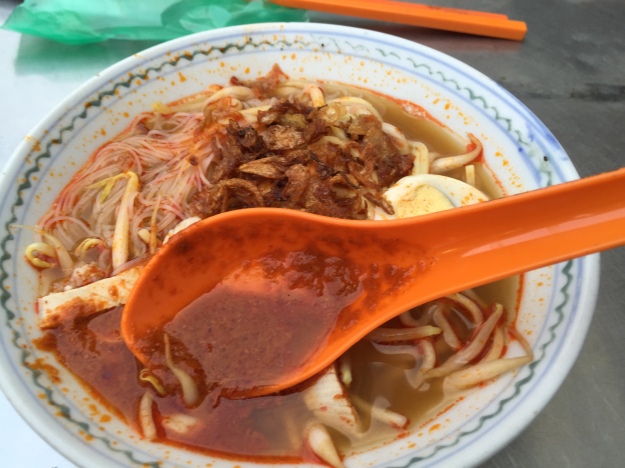 Recently discovering the island’s best Indonesian restaurant, I’d be remiss for not including this place. One of our close friends is Indonesian and she’s married to a Canadian. Friends with the owners and master chef, they invited us out to Nona Bali a few weeks ago for a gastronomical treat. More intricate than its Malsyain counterpart, Indonesian food is a cornucopia of flavors all molding together. Much more than just Beef Randang, we enjoyed lamb, ribs and prawns cooked to perfection. Specializing in caramelized tangy sauces, it’s one of the best non Malay foods available in Penang and shouldn’t be missed. Tell Peter and Made (his name, not a typo) you saw their place on our blog and hopefully they’ll prepare some off the menu dessert specialties.

While not necessarily a Top 10 list, enjoying the foods listed above certainly comprises one the best reasons to try living in Penang. If you’re following you know we’re probably heading to Thailand in 2017 after our lease expires. Quite different from its neighboring country to the north from a food perspective, Penang is still up there as one of Southeast Asia’s best choices for food and while it’s not the only reason for moving here, it sure ranks high. 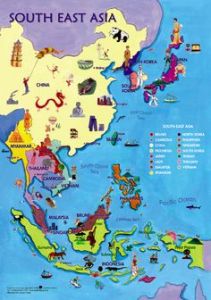 Next year our plans for traveling while young and healthy kick into full gear. On January 8th we hit Tasmania, Australia for a work exchange assignment with a wonderful host and purveyor of jams, jellies and other condiments. In April, we visit Myanmar and work two weeks at a newly opened hotel. Our friend Jamie is planning another visit so we’ll hit Vietnam and the entire month of September is booked at an eco-lodge in a remote southern island of Cambodia. Hoping you also make the most of life, our advice remains the same;

Then retire to a cool place like we did before you’re too old to enjoy it.

Happy 2016 from The Experimental Expats !!

Comments always welcome and thanks for following.