Proving all good things are worth waiting for, our return to the big city culminated with a full-page color stamp in our passports. Exactly 660 days after the Japanese owned and California based bank “eliminated my position” and then mysteriously hired two less experienced people six months later, Diane and I are officially MM2H visa holders. Bypassing all traditional and secure methods of early retirement, we filed the paperwork from overseas as soon as my 50th birthday arrived. Six short weeks after that we sold our overpriced but very comfortable suburban San Francisco Bay Area house, thereby rendering us homeless. Spending six weeks in Canada and probably overstaying our welcome with friends and relatives, we figured we’d take a chance and get a head start, knowing the visa would take about 10 to 12 weeks until we received our “conditional letter of approval”. Defying conventional wisdom according to dozens of forum posters and even our MM2H agent’s advice, we successfully opened a foreign bank account from overseas, bought a one way plane ticket to Malaysia and headed out the door with two suitcases, an Ipad, an Ipad mini and two old Iphone 4S phones that we’d need to replace and bid farewell to our old life in North America.

Fast forwarding six weeks later, we’d already been settling in to our awesome condo unit in the beachfront town of Batu Ferrenghi when our agent informed us the approval letter came through less than 10 weeks after filing. Allowing applicants six months to complete the rather tedious process of fees, medical check-up, buying medical insurance and placing two fixed deposits (MYR 100,000 and MYR 50,000), we needed to travel to Kuala Lumpur and ultimately to Putrajaya, the Malaysian government centre before our 90 day tourist visa expired or risk having to re-enter so we hit the road last week. Deciding to use the Malaysian train system instead of flying, we packed a week’s worth of light clothes into a newly purchased medium-sized suitcase, ensuring it would fit in the small overhead compartment of the train and contacted our Uber buddy for an early morning pickup. Penang’s airport is rather far from our house and KLIA, in the nation’s capital, is almost an hour away from the downtown core whereas getting to the train only takes a 20 minute drive to the ferry terminal and a 10 minute ride on Southeast Asia’s oldest continuously operating ferry. Conveniently located right at the other side, Butterworth’s train station allows easy access to trains that journey as far south as Singapore and as far north as Bangkok for about the same price or less than Air Asia.

Riding the trains in Malaysia is pleasant enough except for the polar ice conditions that prevail from beginning to end thanks to Malaysians love of air conditioning. Most Malaysians spend as little time as possible outside and this is especially true in Kuala Lumpur where the modern array of indoor walkways connect all the major malls, shopping and office towers. So a million thanks to my readers who warned us ahead of time. Feeling ridiculous for packing long pants and a light fleece jacket, Diane and I didn’t really expect a ride in the refrigerated cargo hold of on airplane but sure enough, that’s what it felt like. Ticketing procedures are easy and available online or you can simply buy them at the ferry terminal where all the bus lines end. Recently adding a new express service that cuts almost two hours off the time, we actually chose the slower train on the way there because the express train arrived in KL too late for our liking. 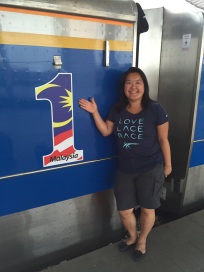 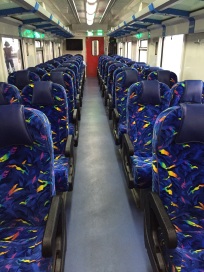 Like everything in Malaysia, the train system is amazingly efficient and easily lives up to any developed nation’s train system. Boarding 15 minutes before the departure time, the European made slow trains are actually more modern than the high-speed trains, with comfortable reclining seats and ample space in he overhead compartment. Placed between the cars, bathrooms  are clean and even have toilet paper (rare for Malaysia). One thing we find comical is how there’s a squat toilet and a regular toilet on a train that looks like Amtrak or any American commuter rail. Even funnier are the signs explaining how to use a toilet with a seat, as if every Malaysian suddenly moved from the jungle into the big city. 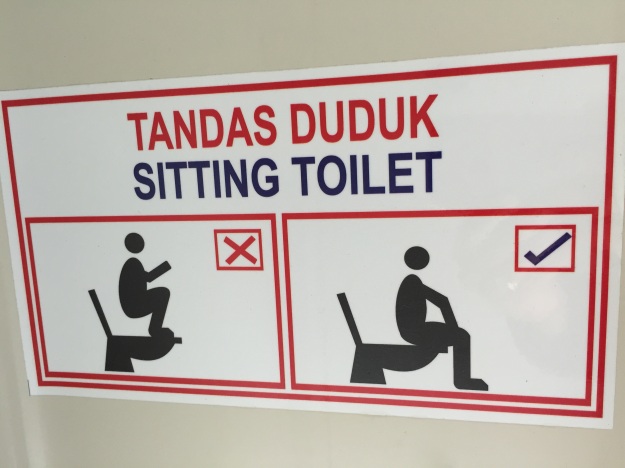 Bundled up like Canadians on a cold winter’s day, everyone on the train carries several layers of jackets, sweatshirts and blankets but nobody seems to think its ridiculous riding for five hours in a 45 degree refrigerated car. Eventually you get used to the cold but I hung out in between cars for long periods because I find it insane to catch a cold in a tropical country and you can see the scenery better from there anyway. Making several stops at stations small and big, they give one warning announcement and another that announces the station. Allowing passengers about 22 seconds before the train pulls away, I highly suggest gathering up your luggage and moving to the front well before the train stops. Oddly, passengers manually open the train door if they wish to enter or exit and nobody stands outside to look for straggling passengers. (On the fast train, there’s automatic doors but they still only stay open for less than 60 seconds). Fortunately for us, lots of people exit at KL Sentral, the Grand Central Station of Kuala Lumpur and the train pulls in slowly due to multiple commuter lines using the same tracks. 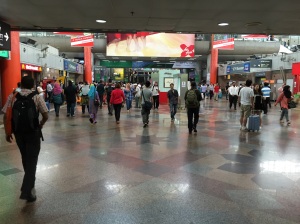 Arriving within five minutes of the scheduled time, we exited the train and made our way to the KL Rapid LRT train for a quick ride to KLCC (KL City Centre), the city’s newest and most vibrant area. Although Joy-Stay (our MM2H agent) is in Sri Pataling which is nowhere near KLCC, we couldn’t resist another six night stay at the five-star Traders Hotel. Situated across the street from the Petronas Towers, the Shangri-La runs this gem of a hotel and thanks to a collapsing ringgit, we gained over five cents in currency exchange just over the six days, allowing us to pay about $150 USD per night including all taxes. While normally too luxurious for early retirement, we treated ourselves one last time and for the same price as a Best Western off any US interstate highway, you can’t beat the value. Impeccable service, opulent towels and a shower that proves Asians have no concern about the perilous state of worldwide drought make this our favorite Malaysian hotel and we highly recommend it for a once in a while pampering. 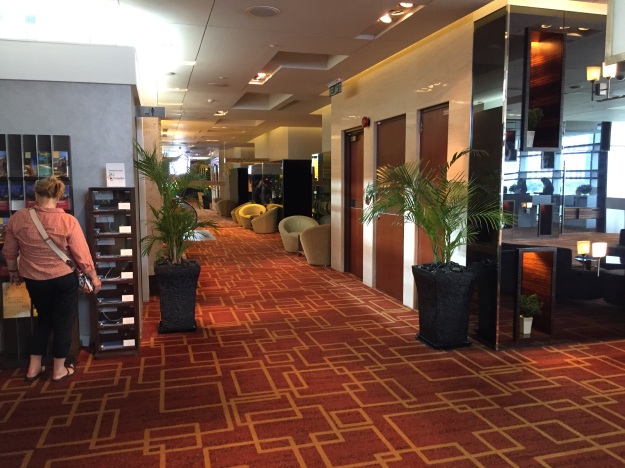 All in all, taking the train seems like a good option for the few of us expats that choose not to own a car (at least for now). After arriving at KL Sentral, we took the LRT four stops to the hotel and walked the rest of the way. Choosing to stay cool and walk is easy since the cornucopia of air-conditioned walkways connect almost everything and its easier to get lost indoors than outside. Remembering they serve my favorite laska in KL in a small place called Ahcheng Laksa, we stopped for a bowl and some Pan Mee (not found in Penang for some reason).

Speaking of driving, the Malaysian ministry recently added yet another rule for conversion of drivers licences for those not lucky enough to come from a country with automatic conversion privileges. (I’ve seen the list and have no idea why they chose bilateral agreements that don’t include the USA or Canada). Anyway, they now need “authentication of current driver’s license” in addition to the other forms and tedious measures. Unfortunately, there’s no such thing in the USA since states regulate driver’s licenses and California had no clue why you’d need something that validates something they issued. (I’m guessing the other 49 states are the same). Explaining this to the ministry or our agent drew blank stares and they suggested we contact the embassy.

Spending one full afternoon at the US Embassy, we met a friendly agent who took $100 USD, looked at our driver’s license and issued a notary stamp that does absolutely nothing except swear that we personally showed him our drivers license. Unable to act on behalf of any state government, it basically authenticates nothing but does satisfy the ministry’s requirement if you intend to convert your license. (According to our agent, it’s legal to drive with your current US license and this sworn document so that’s good enough for us should we decide to drive someday. Also note the US Embassy only issues six appointments per day and they go fast). Passing through the mazes from the KLCC station to the hotel lobby we passed by the convention center which is next door to the hotel. Ironically, there was a retirement convention when we arrived for oil and gas workers. Unheard of in North America, they had events for those with different service levels ranging from 15 to 35 years and the spread looked incredible. Oh, the rest of the world still rewards its workers instead of making them work until 70 and still die broke. How eye-opening.

Anyway, that’s about all we did the first day and mostly we shopped and ate when we weren’t doing MM2H business, except for the incredible monkey experience. Chow for now.

Next: Rivaling Singapore, KL makes shopping the national sport with more malls than all of San Francisco in a one mile square radius. Yeah, we shopped too.

6 thoughts on “Truckin’ by Train”