No, we didn’t fall off the face of the earth. It’s been a long week back here in the big city and yes, we did accomplish our mission. We are now officially MM2H Holders and are free to come and go in and out of Malaysia for the next ten years, although we will have to renew the pass in six years since my passport expires in 2021. Shelling out lots of cash, they ask you to pay an annual fee up front for as many years as you want up to ten but most people only pay until their passports expire since you have to return anyway at that point. But more on that later. Once we return back to Penang, I will post about our entire trip. For now, however, I have to share something that’s basically made the entire process worth it. No, it’s not some new career or volunteer job that fulfilled our dreams. It’s spending some unexpected quality time with the world’s tamest silver leafed monkeys.

Before you judge me, let me run the disclaimers. Obviously, I’m fully aware that these monkeys belong in the wild foraging for their own food instead of hanging out on people’s shoulders eating bananas that tourists feed them from vendors that make their living selling huge burlap sacks of monkey treats for only 10 ringgit. But I love monkeys so much I could spend weeks with them and never be bored. Intending to volunteer helping animals at various wildlife shelters throughout Southeast Asia, Diane and I will spend time doing things besides being dumb tourists. But this caught me so off guard I had to treat it for what it was; an incredibly enjoyable and heartwarming half hour with monkeys so friendly and interesting, it’s amazing more people don’t know about this area so close to the big city. 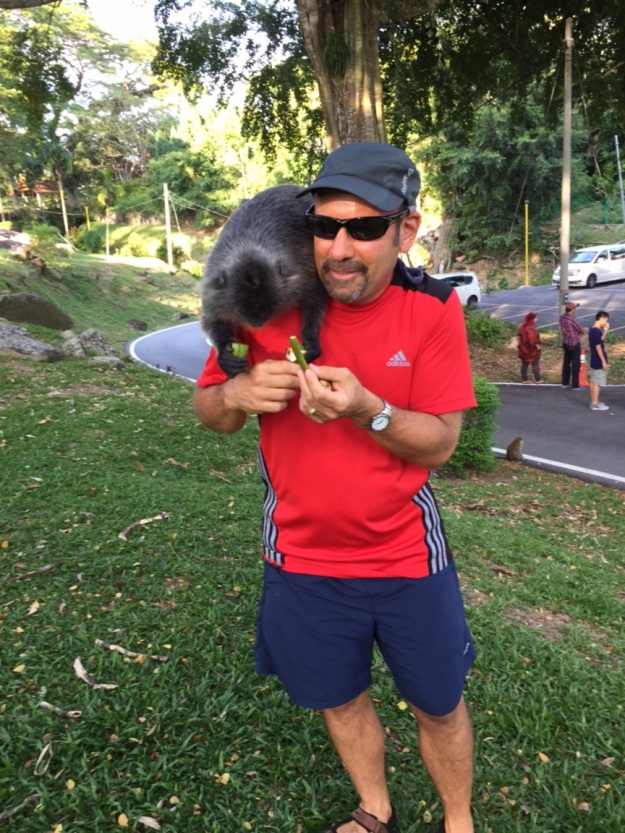 Knowing we’re not in Kuala Lumpur very often, we decided to spend six days even though we only needed a few hours on two days to complete the MM2H visa. Possibly the world’s coolest premier banker, our new friend and relationship manager at our bank agreed to spend some time with us on Saturday to show us the KL Tower and eat some Nasi Kandar where the real (overweight) Malaysian Indians hang out. Having completed the visa on Thursday, we searched for a day trip that didn’t involve visiting ethnic neighborhoods, mosques or walking tours since we walk more than 99% of the population. About an hour outside of KL is Kuala Selangor, a charming seaside town with a unique attraction. One of the few places in the world where firefly colonies are visible, it seemed like an interesting few hours and leaves late in the day since you can only see the fireflies at night.

Touted as a “nature park”‘ there’s a small reserve where the guide books and internet reviews say it’s possible to view birds and “sometimes monkeys if you’re lucky”. Not really making much ado about monkeys, our guide picked us up and told us we’d be making a stop at a lighthouse where the straits are so narrow you can almost see Indonesia. Apparently someone told the monkeys that it’s easier to hang out in the trees near the parking lot and simply wait for the bus loads of tourists to arrive. Named Bukit Malawati, the area is a beautiful spot with an old lighthouse on the top that overlooks the Straits of Malacca.  Featuring some canons that nobody seems to know anything about, the guide was trying to convince our group to leave the parking lot and walk up the hill to experience the view. Totally ignoring her, Diane and I spent our half hour with  sack of bananas and some incredibly awesome “wild animals”.

Known as “silvered leaf monkeys”, they’re actually Silvry Lutungs, a medium-sized monkey living in Peninsular Malaysia, Sumatra and Borneo. Technically langurs, you’ve probably seen them in zoos described as “Francois Langurs”. But even working at the zoo wouldn’t get you as up close and involved with hundreds of them. Big and small, even mothers carrying little babies will enthusiastically eat from your hands and they’re more than happy to jump on your shoulder and eat their bananas while you explore their little fingers, pet them and just get to know the  like they’re your own personal pets. Unusually non smelly, they don’t poop on you and have the most adorably human eyes. Like dogs, they all have individual personalities and some are more dominant but only with the other monkeys.

So please forgive me for going ga-ga over something as ridiculous as monkeys that learned how to eat well by simply acting less aggressive than others. Maybe I’m being childish or even irresponsible by feeding wild animals that belong in the trees but they’re not threatened, endangered or any worse off since nobody feeds them dumb shit like potato chips. For us, it was the absolute best anormal experience so far in Malaysia, albeit slightly unethical.

Oh yes, we did see the fireflies but it’s too hard to take pictures that look like much so instead I’ll just show you the view from our dinner stop. Scenic and reminding me of Borneo, the downside is a horribly disgusting environmental situation that includes garbage everywhere and toilets that literally flush into the murky river. Malaysia has a long way to go despite KL looking like a big city in any G8. Anyway, apologies to the animal rights activists and anyone else offended by feeding monkeys that shouldn’t be this tame but our blog is about our own personal experiences as expats so that’s what we write about. Promising posts detailing the test of our trip including the semantics of MM2H, we’re off to eat some incredible food unavailable in Penang. Perhaps the best part, we love the food but wouldn’t ever have chosen KL or any big city because we’d windup chubby like so many Malaysians living here already are. Ah, progress and its downfalls.

Cheers from the beautiful Traders Hotel in KLCC.