Considering the past week relatively successful, Diane and I are spending the last weekend in temporary housing, this time at the beautiful Holiday Inn Resort in Batu Ferringhi, just down the street from our new condo. Wanting to give a huge endorsement to the staff at the Four Points Sheraton Penang for going above and beyond and rescuing us from the depths of the horribly dilapidated and sadly pathetic Copthorne Orchid Hotel, we can’t say enough good things about them. Our new friend Afi is one of the front desk staff and happens to live a stones throw from our new house and she made everything perfect from start to finish. Already texting Diane daily, she’s going to show us around the area where the tourists don’t go once we get settled in on her day off. (Malaysians work six days a week for the most part which is too bad because it doesn’t leave a lot of time to enjoy the beautiful country). Unfortunately nobody cancelled their weekend stay so we packed our bags and went up the road. While waiting for the van to shuttle our 10 bags of stuff over to the other place,  I partook in a great conversation with the general manager about everything from Malaysian politics to American films. Amazingly candid, expats should never engage in this kind of talk unless engaged by the other party but let’s just say I gained some valuable insights on how average citizens feel about the prime minister, at least in this state. Kudos to the hotel for a job well done. 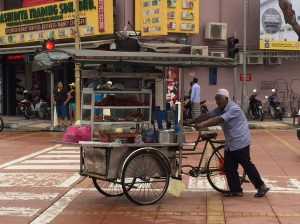 Initial reaction to expat life in Malaysia so far is nothing but positive. Briefly touching on our first week’s agenda, getting around the island is easy. Modern, clean and very well air-conditioned buses traverse the entire main road of the island from the downtown core of Georgetown all the way to the end of the road at Penang National Park. Figuring we needed a pass, Diane and I navigated our way down to the “jetty” where the buses end and bought a seven-day unlimited pass by showing our passports and paying MYR 30. Needing a form for monthly pass that includes a the passport picture, we settled for the weekly one and used public transit all week while starting to investigate the ins and outs of where to shop and what to do. An even better option is Uber and although we haven’t used it yet, we downloaded the app and there’s no shortage of cheap available cars willing to come get you any time of day or night. People complain about taxis but maybe those people have no experience with real crappy taxis as we’ve only met friendly drivers willing to call another one should they be waiting for another passenger. Recently passed legislation removes haggling by using a metered system but we’re told some drivers refuse to use it, citing difficult economic times. Considered one of the cheapest countries in the world for taxis, we don’t have any issues with pricing.

Already able to set up the basic necessities of life, it’s actually been easier than dealing the morons at Comcast and various other U.S. Service companies where it’s almost impossible to speak to a human being and when you do, they’re Mexican and can’t speak English or based in the Philippines reading from a script and can’t help you anyway. Needing new IPhones, most locals told us the best company on the island is Maxis. Privately run and founded by a Malaysian Indian business person, they offer 4G LTE service that’s faster and better than anything we ever had in the Bay Area. But that’s all irrelevant if you can’t understand what you’re buying. More than any country I’ve ever seen, everyone here knows their job and the country is in that stage prior to “fully developed” where pride in workmanship is visible no matter what your job is. Arriving at the Gurney Plaza mall, we chose Desmond to help us and he meticulously explained how coverage works, what phones and plans we should get and wouldn’t let us leave until we were totally comfortable. Choosing a plan that comes with 4 GB of data monthly, calls at about 2 cents per minute to Malaysia and two phones linked to one account, we even avoided a long-term contract with a monthly plan that people in Kuala Lumpur told us didn’t exist. Priced at about MYR 169, it works out to less than $50 a month, not much more than we paid in California. And like most everyone that’s helped us so far, Desmond gave us his card, personal contact information and told us to text anytime with questions or problems.

Seemingly a throwback to my childhood or even earlier, Malaysian customer service is unbelievably fast, reliable and best of all, very helpful. Before we even moved in, we asked Catherine, our awesome property agent, about TV and Internet plans. Realizing the main cable service (Astro) is relatively useless for us due to the limited number of channels of interest, we asked about other options. Discovering the national telecom company also offers bundled internet service along with a package of 17 channels a month, we opted for that and so Catherine sent an email to her contact in the company. Sending pricing information via text message the same day, we replied back with some basic information about the condo site, our passport numbers and what plan we wanted and the next day got a text back giving us an installation date, the name of the installer and what time we should expect them. Setting it up just five days later, it corresponds with the beginning of our tenancy and couldn’t be any more efficient. Offering several levels of connectivity throughout the island, depending on desirability of your chosen location, the strongest available WiFi comes all the way out to Batu Ferringhi although the signals are not very fast during peak usage hours, mostly in the evening. But hey, we’re retired expats and it’s hot during the afternoon so daytime posting is fine by me. 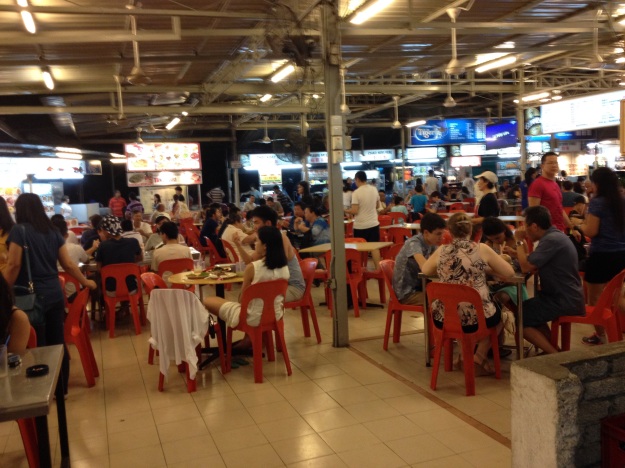 Possibly the most important example of Malaysian hospitality in the customer service field was the banking. Because of some issues of multiple user ID accounts in our U.S. account I was having difficulty linking out account to the Malaysian side which is necessary for wire transfers between the two countries. Rejected twice I decided to call the Malaysian customer service line since we all know how useless that is in America. Communicating in perfect English, they listened to the problem, referred it to the IT people and promised to call back later on the day  Sure enough, they explained the issue but unfortunately when I tried on the IPad I discovered  that it needs to be done from a secure computer with an updated browser. Thanking them for the immediate response we set off to the Georgetown branch of the bank to get a bank draft for our new landlord since cheques were not ready and of course the customer service agent helped us resolve the banking issue in five minutes.  Totally versed in all retail banking matters, it reminded me of the good ol days when they conducted banking in a bank and not on a PC . While you can still do most functions online, living in a county where they really want to help goes a long way. Hats off to the bankers as well as all the others.

Malaysia is a phone happy nation. Everywhere you go, everyone is on the phone at all hours of the night and day, even while they work. But unlike America, the phone culture hasn’t ruined their social skills or dampened their polite nature. Every time we wait at a but stop, whoever is sitting there moves over to let us sit and the same goes on the bus. If you need directions or information and the person doesn’t speak English well enough, they find someone who does right away. They always bring back the right change and there’s no tipping so nobody shortchanges you or expects anything extra. Vendors are friendly but not overly pushy, certainly nothing like the annoyances in Thailand. Exercising basic good judgement is all you need to feel safe and even the shantier parts of the island don’t fee intimidating like other places in Asia where they see white boys and immediately smell dollar signs. Of course since they all speak Hokkien to Diane I think we get the benefit of the doubt most times. Generally speaking, we already feel kind of at home and seemingly avoided that first 30 days of expat chaos I read so much about.

Today is the first real tropical beach day with nothing but blue skies and no rain so for now we sign off and head for some relaxation. Actually preferring overcast and some hazy sun anyway, days like today are too hot for daily business and all the waking we enjoy so it’s a good thing there’s not that many perfect “beach days”. Besides, we can always hop a quick flight to Thailand when we want the beach for a few days. More to follow as we get moved in. Thanks for following along.

6 thoughts on “Island Hospitalty and more”