Jumping right into the fire, (literally), Diane and I experienced some Malaysian hospitality before we even left Walnut Creek. As regular followers know, our plan of becoming expats in Penang next month is a huge leap of faith since we’ve never lived there or even visited. Planning on staying at The Copthorne Orchid Hotel for a few weeks after arriving while searching for an apartment, we’ve corresponded with one of the hotel’s sales managers to get quotes and information. Apparently aware that those not from the tropics hate the torrid heat and humidity, we received the following email this morning:

We would like to inform that our hotel will be carrying out chilled water pipe rectification works which will affect the air-conditioning supply for all rooms and outlets in the Hotel from 29th June till 2nd July 2015 (both dates inclusive). Please advise if you are ok with the above situation before we proceed to quote. 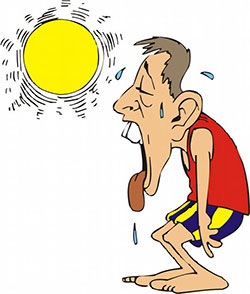 Unexpectedly accommodating, the hotel staff appears to be putting our potential comfort (or lack thereof) ahead of an easy booking for newbies that obviously need a quick and easy place to stay. Conveniently in the district we’d like to live in, we chose the hotel for its relatively moderate rates (by our standards) and proximity to public transportation, shopping and a host of apartment complexes with the amenities we’re seeking. Having arrived at our five-star Hawaiian hotel for our honeymoon 14 years ago only to find a construction zone in half the hotel that they conveniently forgot to mention, I’m already impressed. With our MM2H Application in the “process” status for at least another two months, we’re in no hurry so the complimentary advance notice helped us avoid our first major annoyance as we’ll simply stay in Canada an extra week or two. Score the first thumbs up for Malaysian hospitality.

Seemingly stranger but equally accommodating, our potential relationship manager at HSBC Malaysia called us on our cell phone in response to some timing issues and concerns we had with opening our local account and placing the Fixed Deposit. Referred by a friend on what used to be the world’s best country-specific forum (now defunct), he had the misfortune of calling during the Overtime period of a deciding game 7 in the Stanley Cup Playoffs’ second round. As all Canadians know, this is a sin and I almost let the call go to voicemail but seeing a ten digit number I figured I’d better answer. Assuring us he can work with our schedule, he apologized for calling in the middle of the game and demonstrated another positive act of Malaysian hospitality by calling at all, never mind the 15 hour time difference.

But the story doesn’t even end there. Opening a secure email from HSBC the next morning, our awesome manager-to-be told us he’d gone to university in St. Louis, Missouri where he was a big supporter of the St. Louis Blues, the local NHL hockey club. Amazed that our Malaysian bank manager would know anything about North American ice hockey in a country where “cold” means anything below 30 (Celsius), he even asked us what team we cheer for and who he thinks will win this year. Admitting his real passion is The English Premier Soccer League, the conversation ended with a reassurance that we could hop off in Kuala Lumpur before we get to Penang to open a local bank account. Score two positive notes for Malaysian hospitality as far as I’m concerned. Thinking perhaps I’m being overly complimentary, I am trying to enter this Experimental Expat phase with a positive open mind and so far, Malaysia seems ready to help us adjust accordingly. Stay tuned.

Coming next:
Our departure from California on May 19th; After that, please excuse the weekly clunky posts from my Ipad but do watch for periodic updates and stories of whatever we do on Canadian soil until late June.

3 thoughts on “Sweaty Palms (and everything else)”