Tick tock; tick tock. Yet another week drags by as we wait for the painstakingly and ridiculously unscientific process of “closing escrow”. Perhaps the hardest and most frustrating week of my life, we’ve gone back and forth with the buyers, the real estate agents and the title company in hopes of finally getting paid cold hard cash for the sale of our overpriced piece of suburban dirt. Meanwhile, I’ve recently been recalling some stories of our last Singapore trip. Steeped in colonial British history, Singapore is a fascinating city in many ways, albeit not for experimental expats planning on living with no real income. Anyway, when we last left off, the discussion centered around the eminent changes in policy now that the government’s much-loved and long time leader has passed on.

Having focused on our determined quest to find cultural attractions outside the department stores, I recently posted about our experiences in Singapore’s Little India and Chinatown districts. Turning my attention to one of my favorite topics, I began contemplating the fate of Singapore’s other cultural anomaly besides shopping: The signs. Directing citizens and visitors alike how to conduct almost every behavior in all possible public situations (and even some private ones), they’ve always held my interest. Although accepted as a way of life in exchange for years of relative prosperity, low crime and political stability I’ve been told enforcement of many rules and regulations recently toned down and i began wondering if the new generation wants more freedom and less signage?

Questioning whether a population can voluntarily abide by codes of conduct without being constantly reminded, I decided to share some of my favorite signage in Southeast Asia. Time will tell but please tell them to keep the classics like this piece of complete political incorrectness I found in Thailand

Strolling through the beauty of Singapore’s Botanical Gardens, we noticed it’s OK to own dogs as long as the mean ones remain strapped to a muzzle. Obviously not a San Francisco based sign, this type of ordinance would be challenged in the media, on the internet and then in the courts until it was finally removed and the politician stupid enough to pull a stunt like this would be mocked for years to come

Constantly being reminded of the rules is one of the things that makes Singapore fun. Injecting humor and stereotypes into the signs emphasizes the point even more and even lightens up the mood for those having a crappy day. Somehow I think this gem targets Americans since they made the characters obese and the implied ignorance of the reader is classically represented by the buck teeth.

Occasionally the government spends a bit less money and crams six rules into one sign. Teaching citizens not to litter, feed bananas to monkeys or smoke in public, this one seemed OK but the second one seemed a bit strange. Usually referring to living creatures that potentially inflict harm, Singaporeans should apparently  “beware” of doorways that open. I wasn’t aware there were doors that didn’t open but thanks for the warning. 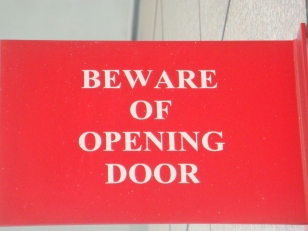 Turning our attention to Malaysia, the first thing that jumped out at us after the long flight from SFO was the sign stressing how seriously they take drugs and trafficking. Fortunately, my drug of choice is caffeine. Usually more reserved than me, Diane spent an uncomfortably long time monkeying around the sign and snapped a few pictures. 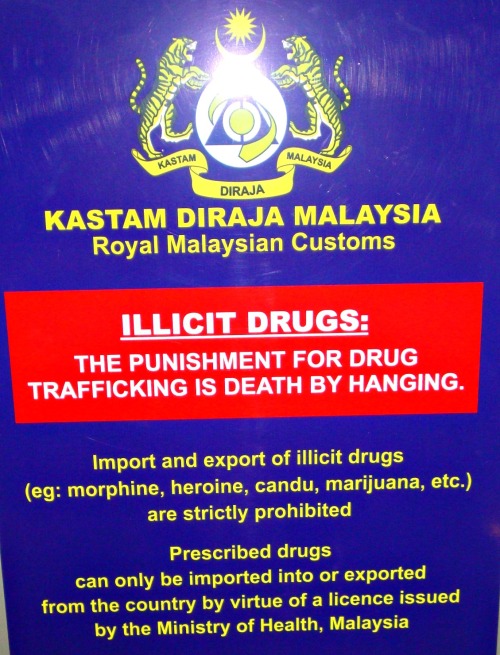 Thinking picture-taking at the customs area was not the best idea, I soon learned that while Malaysian rules on illegal drugs are strict, the USA is the only country on Earth that belittles travelers in plain sight of others should they so much as blink a wrong eyelid at a TSA agent. Smiling at Diane while she took another picture, we boarded the only Malaysia Air plane we’ve ever taken since nobody else flew to Lahad Datu. Barely a blip in the jungle, the “airport” featured a concrete wall and what appeared to be a small dumb-waiter that transported the luggage two feet from the wall to a small “terminal” area where passengers picked it up. Greeting us was a prominent reminder to keep our saliva to ourselves 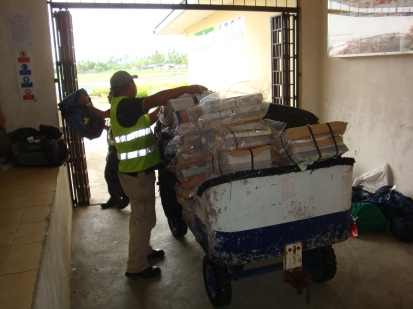 Probably my favorite sign in Southeast Asia, there’s nothing more inviting after an excruciatingly hot trip to the jungle than returning to the universal comfort of a cold one. Here’s to hoping the signs stay forever different and interesting

Looking ahead, Diane and I plan on staying in our house as tenants for a few weeks after close of escrow and the computer will be the last thing we pack. Sending it off to storage along with some other personal artifacts like all our Asian art, we figured it’s best to get settled before sending what little we have left on a container ship with millions of other boxes. Taking no furniture, we’ve successfully liquidated just about all our possessions and really will be starting from scratch carrying clothes, an Ipad, one Ipad Mini, two crappy Iphones and a letter telling the customs officers that we’re current MM2H applicants. Knowing I have little experience posting from the Ipad, I ask for some leeway when it comes to formatting once we pack it all up. Thanks for following and please stay tuned.

Coming Soon: What it feels like if escrow ever closes (I still have no idea)

4 thoughts on “Survival of The Signage”