As a new political horizon dawns on Singapore, I find myself reflecting back to our last Singaporean excursion a few years back. Initially planning an exploratory visit to Penang for expat destination research, instead we decided on the glitz, glamour and excitement of the world’s only country where cultural pride involves department stores, cash registers and shopping bags. Maybe we’d been living in Status Symbol Land for too long or perhaps all Americans long for another land where instant gratification at all cost is not only encouraged but practiced by an entire citizenry. Either way, the memories of a beautiful rainforest vacation to Sabah in Malaysian Borneo quickly faded into a five-star adventure at The Pan Pacific Hotel in Singapore’s yuppiest enclave. Like Dorothy realizing she’s not in Kansas anymore, we emerged on the Marina Bay Streets determined to find something beyond Orchard Road that made this town tick.

Realizing this wouldn’t be an easy task, we spent some time reading guidebooks and talking to the impeccably dressed and extremely courteous hotel staff. Explaining that we wanted to experience some cultural aspects of the city, they all seemed confused and understood as much about multicultural life as most Americans understand about anything outside the USA (little to nothing). Undaunted, we left the hotel via an air-conditioned back door hallway which ultimately led to the pristine subway terminal designed to quickly illustrate the difference between Asia’s incredibly beautiful modern infrastructure and The San Francisco Bay Area’s dilapidated obsolete network of crumbling commuter railways. Glancing up at the billboards, the first thing we noticed was the third place winner of a photography contest explaining how Singaporeans love shopping. Yikes. Fortunately, we discovered our favorite two cultures had their own version of Singaporean culture. Having explored and thoroughly enjoyed Little India one day earlier, this time we headed to Chinatown.

Before deciding to explore Chinatown, we decided to walk around the surrounding area a bit. Having heard so much about The Merilon, Singapore’s national marketing icon, we decided to stroll down to the waterfront to check out it out. According to Wikipedia, The Merilon is “a traditional creature in western heraldry that depicts a creature with a lion head and the body of a fish.” Designed by Alec Fraser-Brunner, a member of the Souvenir Committee, the symbol became a mascot, marketing icon and national personification of Singapore. Unfortunately, lightning struck it in 2009 and although it was initially repaired, apparently a new refurbishing was underway on the day we visited. Expecting a large 8 meter statue, all we saw was a dinky little replica. Disappointed and  not realizing the original was out for repairs, we failed to understand the hoopla.

Pushing on the next day, we stepped outside into the torrid 110% humidity determined to prove we could be walking tourists despite the discomfort and profusion of sweat beads that never subside. After all, we were planning on retiring early in a tropical environment although we hadn’t yet chosen Malaysia since both of us still had reasonably well-paying jobs. When traveling, we often display the Canadian part of our somewhat multi-cultural marriage because it inevitably leads to some good old Northern hospitality from a Saskatchewan native that happened to give up minus 30 winters for never-ending heat. On this day we couldn’t find any but we did stumble on The Canadian Chamber of Commerce. Making it a habit to capture Canadian presence anywhere we travel, we added this nifty picture to the collection but couldn’t stop and visit since it was the weekend. 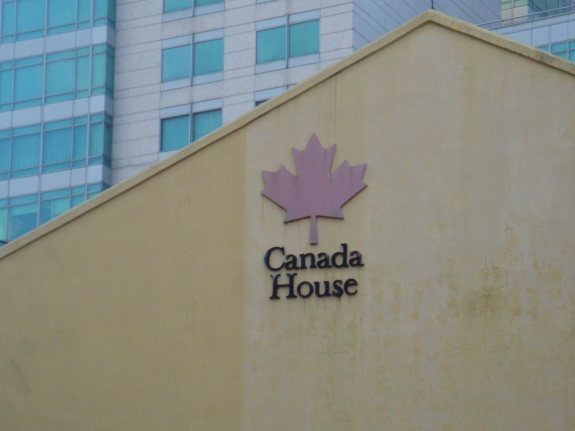 Eventually arriving in Chinatown, at first we saw what appeared to be typical for most Chinatown neighborhoods throughout the world. Filled with restaurants, traditional pagodas, colorful streets and shops carrying more crap than anyone could ever want, we had some Singaporean style Chinese food complete with a durian flavored dessert to remind us this wasn’t San Francisco’s Chinatown. 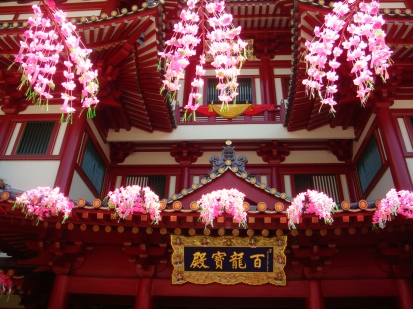 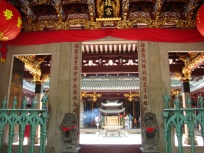 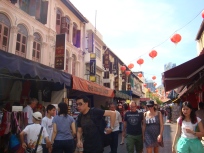 Destined to soak up some culture, learn some historical information and genuinely enjoy an afternoon out of the mid-day sun, Diane and I found a promising sign when we discovered the Chinatown Cultural Centre at 48 Pagoda Street. Easily the most educational and interesting displays of Chinese culture we’ve ever come across, the centre has recreated the original interiors of its shophouse tenants in the 1950’s. Filled with artifacts, signage and interesting displays, we finally found something meaningful in Singapore, culturally speaking. From their website:

The colourful past of Chinatown comes alive within the walls of these three beautifully-restored shophouses on Pagoda Street, comfortably nestled in the midst of Singapore’s bustling Chinatown district.

Every nook and cranny in the Chinatown Heritage Centre pulsates with the memories of yesteryear, offering an experience like no other as one is transported to Chinatown in the budding years of Singapore’s establishment as a seaport.

From the desperate hopefulness of the many “Sinkheh” (new migrants) – risking life and limb to embark on an arduous journey from the various Chinese provinces to the promised land of Singapore – to the raw, seedy and underground practices of gambling dens and secret societies, be prepared to experience a sense of nostalgia and sentimentality as you step into the pages of Chinatown’s history.

Filled with enough to keep any history buff entertained, the center is highly recommended even for people not married to a person of Chinese descent. Proving life was equally difficult for many Chinese immigrants, the exhibits helped us understand the pulse of an important ethnic group that dominates the country today. Hearing so many stories of multi-millionaire Chinese businessmen buying up the city’s prestigious real estate, it’s both refreshing and humbling to learn of everyday life lived by thousands of Chinese immigrants. Helping to shape the city into a bastion of wealth and prosperity that’s become synonymous with Singapore today, the centre provides an escape from the superficial stereotype of a city obsessed with material objects, power and wealth for those willing to learn.

Grateful we hadn’t wasted all our time browsing expensive shops for stuff we’ll never be able to afford once we arrive in Penang for early retirement, I’m happy to report it is possible to discover cultural attractions and spend your time in Singapore learning about what shaped the city into its current state. Between Little India, Chinatown and The Arab Quarter, the cultural tourist can easily find enough things to enjoy while still engaging in the national sport of shopping. Simply patronize the dozens of shops, stalls and small businesses that call Singapore home.

Ultimately, one of the primary reasons for visiting Singapore is the food. Although curious why “Singapore Rice Noodles” exists only as a fictional invention of North American restaurants, there is a cornucopia of awesome food to be enjoyed. Every visitor should immediately head to Lau Pa Sat, Singapore’s most famous food centre in the downtown core and enjoy a host of incredibly delicious and relatively inexpensive hawker style food. Enjoying a multi-cultural feast of Singaporean style seafood (spicy), middle eastern style deep-fried flatbread and various other delicious items, Diane and I finished up the day feeling both culturally and gastronomically satisfied. Until we went to Starbucks for a nightcap and realized we’ll need to give up the double shot Latte habit once arriving in Southeast Asia as expats unless we bring an extra suitcase filled with cash. Oh well.

Please share any cultural experiences you’ve had in Singapore. We’re gearing up for our first trip back some time in 2015.