Realizing flexibility and open-mindedness is the key to a successful overseas expat adventure, Diane and I began recalling some interesting albeit odd occurrences we experienced in Thailand. Having just learned about new rules on income verification for all MM2H applicants (the Malaysian Social Visit Pass), I recently posted about concerns for American applicants due to strict privacy rules prohibiting disclosure of certain financial information. Deciding to rehash Thailand as a real possibility should the Malaysian government reject our application, we reflected on some sights and sounds that proved interesting.

Although paltry compared to our adventures trekking to a Hill Tribe village  or spending the day as an elephant owner, the fish massages scattered throughout the country stand out. Strolling through Bangkok searching for a Thai Massage, a local suggested we head down a side street but instead of a petite Thai masseuse we found several small studios with fish tanks, towels and shopkeepers poised outside waiting for the next tourist. Unfamiliar with this bizarre practice, we figured it couldn’t be any worse than eating bugs for the first time so we pulled out a few Thai Bhat and gave it a shot.

Technically known as Garra rufa, doctor fish and nibble fish are more commonly used terms for a small species of fish that lives and breeds in Turkish river systems and hot springs. Clearly more like a strange creature seen on an episode of Nature, this small fish that looks like a guppy forages off dead skin searching for their natural food. Unclear how this translated into a rather gross tourist attraction, I delved into the issue further, deluging the poor Thai clerk with a series of questions sounding more like a history quiz.

Amazingly, Diane agreed to join me

Interestingly, the clerk knew a bit about the topic and explained that the fish treatment reduces symptoms of psoriasis although it’s never been considered a cure. Unsure how it morphed into a spa treatment, he simply offered us a theory that it’s good for tired, sore feet. Debated around the world for obvious sanitary purposes, the treatment has never really been proven as positive or negative. Relatively new, the first fish spa opened in 2006. Known for many other oddities, Japan was the first place to open a spa, followed by Croatia.

Surprisingly, fish spa treatment centers are found in over 20 countries including Malaysia, Pakistan, Cambodia and all the Nordic countries (Not really surprising; how many naked saunas can you see before it gets boring?). Legally banned in several US states and Canadian provinces, a whole spew of articles surfaced in 2011 all over the United Kingdom claiming fish spa procedures could spread diseases like HIV and Hepatitis C. Had they posted this article in the lobby, perhaps we might have passed.

They liked my hairy leg better 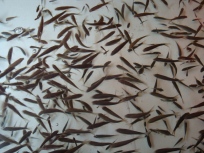 go ahead, stick your foot in

Grossed out but already 20 Bhat poorer, Diane and I reluctantly took two towels and followed the clerk inside where we chose from a series of tanks. Heated with warm water, it felt like stepping into the Addams family wading pool initially as we waited anxiously to see whose feet the little critters would prefer. Hairier than almost all Asian men, (and women for that matter), my legs were the food of choice as they swarmed around nibbling away.

After about seven or eight minutes, the fish begin to tire and then you’re just left sitting there as if you stuck your feet in the fish tank of any Asian food market for no good reason. Feeling none the better or worse from the experience, we dried our feet and chalked up one more new experience. Rating the “spa treatment” on a scale of one to ten, I’d give it a five, neither positive or negative . Unlike a Thai Massage, we didn’t grimace in pain but walking through the sweltering streets wasn’t any different for the rest of the trip.

Recalling another interesting tidbit from Northern Thailand, the Cabbages and Condoms Resort and Restaurant seemed odd at first and even more surprising once we learned the story. Known for promiscuity, Thailand’s red light districts solidify the country’s reputation as a haven for free-flowing sexual escapades dating back to the Vietnam War when servicemen patronized its sweltering sex shops. At first we thought the large billboard with multi-colored condoms was even stranger than the fish massage.

Discovering the restaurant’s purpose was to promote a better understanding of family planning issues, we learned all about the NGO known as The Population and Community Development Association (PDA). Created in 1974, the program traversed the rural areas of the nation providing education and information on family planning and contraception. Surprised at the candor but impressed by the mission, it made me wonder what would happen if they opened a branch in Wasilla, Alaska. 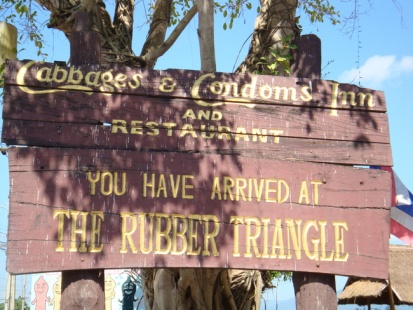 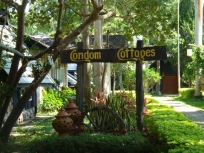 cooling off at The Condom Cottage with my favorite beer

Another fascinating and colorful highlight of Thailand is accessible right off the main road. While our two-day excursion by elephant and trek to a village of Hill people was amazing, the Karen Long Neck Hill Village in Mae Hong Son provided the backdrop for some of our best photographs. Sadly, the village is a cheesy tourist attraction that made us feel a bit guilty for patronizing.

One of my favorite pictures

Charging 500 THB just to enter, the village consists of several market stalls where women make stuff less interesting than what’s found at most night markets. Refugees from Burma since 1992, they represent the negative side of a government that’s allowed them to live in Thailand safely in exchange for never leaving the camp and producing trinkets akin to a Native American tourist trap anywhere in America. Often prohibited from photographing them without purchasing something, the women do all the work while the men are lazy and nowhere to be found.

Nevertheless, I wanted to share the photos because they are mostly beautiful. Consider visiting a real working village and roughing it up the mountain if you want a more authentic example of Thailand’s Hill People that actually work the land, raise their own crops and take part in the local economy in a meaningful way.

Hoping the new rules for MM2H applicants don’t affect our early retirement overseas before it even gets a chance to start, Thailand remains near and dear to our hearts and I’ve enjoyed making some contacts via the blog who have been kind enough to correspond with us regularly and address some concerns about housing and visas. Promising as it sounds, there’s even a Plan C (Costa Rica) although as you’ll see from November’s upcoming posts, Ecuador is a really tempting choice. If they only knew how to make Asian empanadas.

If you have any “Plan B” stories that life thrust upon you, please share them with comments.