Years before Diane and I planned to retire early and try expat life in Penang, I was sitting in my little studio apartment in the North Beach neighborhood of San Francisco. Waiting for age 50 to qualify for an MM2H Visa was a quarter century in the future, Like almost everyone else, I had a cold beer in hand as I watched  game three of The 1989 “Bay Bridge World Series” between the San Francisco Giants  and The Oakland A’s, their cross-bay rivals. Only 24 years old and brand new to San Francisco, my world rocked violently as the earth shook for what seemed like an eternity. (It was actually only 16 seconds long.) 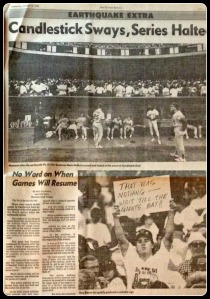 Today, October 17th, 2014, marks the twenty-five year anniversary of the earthquake officially known as “Loma Prieta” but remembered as “the almost big one” for those of us who experienced it. Knowing California’s building standards are superior to many less fortunate densely populated areas of the globe, I’d be remiss if I wrote a post about my hardships although 63 people did die and damage was very high by American standards. But there was no internet yet and many fellow bloggers might have been in diapers on that infamous day, therefore I’ve chosen to commemorate the occasion by sharing my experience as best I remember it. I’ve included some short You Tube videos worth watching if you’ve never seen coverage of the event.

There was no “Di” part of Rodi in 1989, just a single guy from Brooklyn with a simple job in the financial district. Leaving Brooklyn less than one year earlier, I’d never experienced an earthquake before but like many things, fate was on my side. Arriving at the western terminus of Interstate 80, I didn’t know one neighborhood from the other and my big shiny 1987 black Monte Carlo barely fit down the narrow streets with the crazy 45 degree angle hills. Unskilled as a photographer I’m sorry to say I don’t have any actual footage of myself but through the magic of Google Maps, I can illustrate exactly where I lived as seen below: 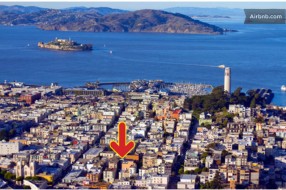 my apartment in North Beach San Francisco circa 1989 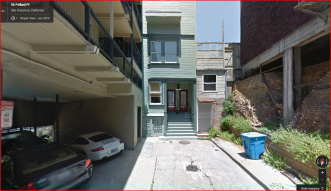 From 25 years of California living (broken up by six years in Calgary, Alberta), experience taught me the difference between a significant quake with potential damage and one that requires nothing more than waiting it out. Determined by many factors, the level of severity depends on the depth of the quake, the fault line and what type of temblor occurs. The range of damage varies drastically and some neighborhoods in San Francisco suffered total building collapses, great fires and violent shaking. Others, like mine, experienced no damage whatsoever, thanks mostly to the strength of underlying rock that shielded most foundations.

San Francisco, like many port cities, expanded outwards during the early 20th century. Many neighborhoods that suffered damage were constructed using land reclamation which is the process of creating new land from oceans, riverbeds or lakes. Prior to the 1906 earthquake, San Francisco consisted of tidal pools, sand dunes and marshland, all of which became The Marina District, one of San Francisco’s most upscale areas. In 1989, it was still affordable for someone like me if you didn’t mind two or three roommates.

Fortunately, I hated roommates and had to get up at 4:30 AM thanks to my employment in the financial industry therefore I chose to live in a small studio apartment in the North Beach neighborhood. Once a haven for the beatniks and poets, its central location and sweeping views of the bay turned it into a highly sought after enclave for wealthier folks. And me. (not wealthy). Paying about $800 a month, I preferred the five-minute commute down the street and the general serenity of mostly quiet neighbors.

Not realizing what the hell was going on, everything in my apartment suddenly started shaking violently and the few things I owned quickly fell to the floor. All the pictures fell off the wall, dishes flew out of the cabinets, the floor started rolling in a severe back and forth motion and a long sound wave emanated from outside, kind of like a series of fireworks only louder. After about eight seconds, the television broadcast faded to snow. The first sign of a serious earthquake is a power loss which implies damage to the power grid and infrastructure. (I’ve not lost power in any of the small subsequent earthquakes I’ve felt since including the recent 5.1 tumbler in Napa). 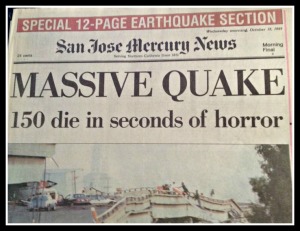 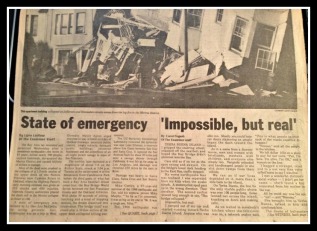 Unfamiliar with earthquake protocol and kind of enjoying the experience as a once in a lifetime surreal Disney ride, I simply stood up in the middle of my dinky living room and waited until the shaking stopped. When it finished, I didn’t really know what to do so I called an old co-worker in New York and told him how cool it was to experience an earthquake. Oddly enough, it was the last phone call I’d make for days. The next sign of a serious earthquake is loss of phone lines. In a pre-cell phone world with no texting, instant messaging and social networking, this presented a potentially serious problem and might inhibit contact with loved ones for days.

Don’t ask me why, but the next thing I did turned out to be the smartest thing of all. I took a shower.

Huh? How dumb is that? 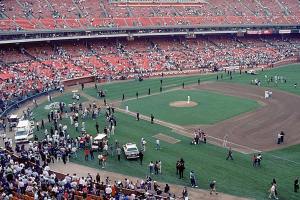 The scene at Candlestick Park

As it turns out, the third sign of a serious earthquake is loss of hot water. Possibly the last person in my building to get a hot shower before the heater ran out, I emerged clean and refreshed although I’m still not sure why I did that. Although North Beach suffered no significant damage, we were the very last neighborhood in San Francisco to have heat, power and phone lines restored. Perhaps owing to the less serious needs of my neighborhood, the lesson learned was don’t rent in a ritzy neighborhood if you aren’t wealthy enough for a four-day hotel retreat.

Fifteen minutes later, most people still had no grasp of the severity and I shudder now thinking how civilization ever survived without instant communication, smart phone technology and home computers. Unsure what to do next, I meandered out to the street with my Brooklyn boom box. Instantly the hit of the building, I discovered nobody else had any portable radios so the building gathered around me like I was a celebrity. Learning what happened, people quickly grew uptight as the radio broadcasts spoke of a major bridge collapse and fires burning throughout the city.

Onlookers at The Marina District

The collapse of The Cypress Freeway in Oakland 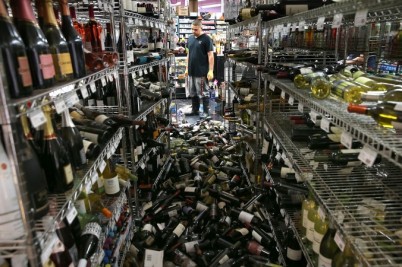 Thankfully, not my wine cellar

Heading to the top of the street, my neighbors and I glanced over at the city but with all the power out, the only thing visible was a plume of smoke rising up from the Marina District, which was in total chaos. Feeling a bit lonely and concerned, I wasn’t sure what to do so I walked down the street and headed towards the neighborhood bars. When you’re 24 in San Francisco in 1989, the answer to almost all problems is have another drink. Sadly, the mayor ordered a shut down of the bars almost immediately, the fourth sign of a major earthquake.

Unlike throngs of gawkers wandering the streets like paparazzi, I decided the safest course of action was return home and continue monitoring the situation on the radio. By nightfall I learned why flashlights come in so handy as I climbed the stairs and picked up all the broken glass in a darkened apartment. Realizing hunger was setting in, I opened the now warm fridge. Disheartened, I realized I’d just shopped for an entire month. Strangely, my employer issued paychecks monthly and I had to buy all my frozen single guy stuff before the budget ran dry.  “Oh Crap” sounds like an appropriate recollection.

With downtown deserted the next morning I walked to my office building but the security guard turned me away. Realizing I escaped unscathed except for living with no power, food and hot water, I walked to some more damaged areas of the city, stunned by the amount of damage located only ten minutes from my house. Unlike less fortunate areas of the world that can take years to recover, things started to normalize in only a matter of days. God forbid an earthquake should prevent millions of advertisers from cashing in despite lost lives. The World Series resumed a few days later. 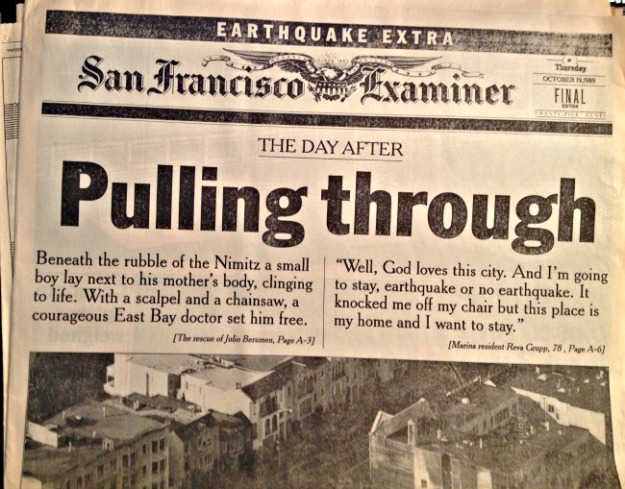 By the third day of living without amenities I’d had enough and took up an offer to stay at a friend’s house until my power was finally restored. Attending the Rolling Stones concert I had tickets for at Oakland Coliseum in November was difficult with the major artery to the East Bay severed but somehow I made it.

Six months later I was on my 32nd floor office at 6:30 AM when The Bay Area experienced the largest aftershock, measured at about 5.1. This was far scarier than the original earthquake. During the 30 second shake, I made my way to the window when my computer started rolling back and forth. Observing the skyscraper next door, I trembled as I watched the building next door physically move back and forth on its specially designed rollers. Although this is exactly what’s supposed to happen to prevent a catastrophic 9/11 like collapse, take my advice. Should you be on a high floor during a major earthquake, resist looking next door and duck under a desk. 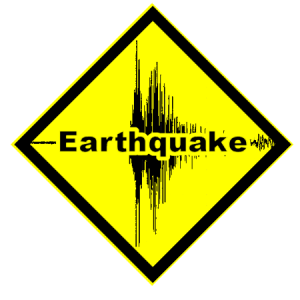 Malaysia’s largest recorded earthquake was a 5.8 magnitude and occurred in Lahad Datu in 1976 with little fanfare. Sandwiched between several active faults and not completely removed from the Ring of Fire, Malaysia is generally considered at low risk from earthquake damage, although seismologists warn Peninsular Malaysia is “still at risk”. Too bad their only advice is “listen to the bulletins issued through radio, television and social websites“. With so much devastation in neighboring China and Indonesia from major earthquakes, I hope someone has a phone line to the world that continues to operate after the ground stops shaking.

The 1989 earthquake was not considered the major inevitable “big event” that’s waiting to happen. Having lived through a 7.1 with absolutely no physical damage, I’ll consider the statistical odds of experiencing the dreaded event before Diane and I emigrate to Malaysia very high.

Meanwhile, I’ll be watching the San Francisco Giants on TV in the playoffs once again on October 17th, twenty-five years wiser and keeping my eye out for any signs of “the big one”.

Has anyone experienced an earthquake of this size in other parts of the world?